Did you know? By Doctor Negar Tabatabaei, PhD 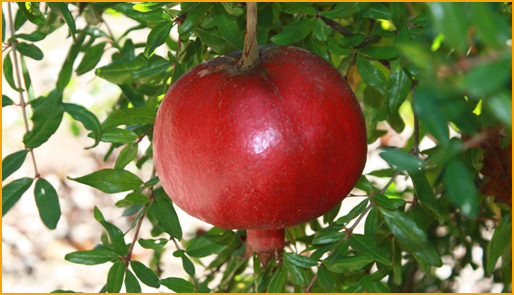 Pomegranate (Punica granatum (Latin): apple seeded) is the main ingredient in bah BAH hot sauce. This fruit which was known to have extraordinary medical properties, originated from Iran and is cultivated in other parts of the Middle East, India, Africa, Southeast Asia and Southern Europe (Morton 1987). It was introduced to America by the Spanish and is cultivated in California and Arizona.

Nutrients and choices to make!

The Daily Value (DV) printed on food labels, gives us information on the nutrient content in a specific amount of a food (usually one serving) and whether it contains high or low amounts of a nutrient. The DV can be used to compare which food is better for you. If a food contains ≥ 20 % of a nutrient it is high and if it contains ≤ 5 % it is low in that specific nutrient. So, a food supply with a % DV representing higher content of healthy nutrients (vitamins, minerals and fiber) and lower content of unhealthy nutrients (saturated fat and sodium) is a better choice. Usually, when making a choice among different sauces, we are hoping for one that would be nutritious and tasty but at the same time low in saturated fats, sodium and calories. The DVs of bah BAH hot sauce, are suggestive of being low in saturated fat (0%), sodium (1%) and calories (10 kcal/serving (oz)). bah BAH hot sauce can be used for cooking, baking, preparation of smoothies and alcoholic beverages.

The scientific literature is suggestive of an anti-oxidant, anti-inflammatory (Longtin 2003) and anti-atherosclerosis (Stowe 2011) effect of phytochemical compounds in pomegranate which may have protective effects on different organs in the body.

Pomegranate juice or extracts have been suggested to have an inhibitory effect on prostate cancer tumors as shown in cell culture (Seeram, Aronson et al. 2007) and animal studies (Seeram, Aronson et al. 2007). In line with these preclinical studies, a human clinical trial (phase II) in California was performed on 46 men with a history of treatment of prostatic cancer with surgery or radiation to investigate the effect of consumption of pomegranate juice on the development of the disease.The results of this study suggested that consumption of a cup (8 oz) of pomegranate juice may delay the doubling of prostate-specific antigen (PSA) concentrations, a risk factor for prostatic cancer, from 15 mo. prior to treatment to 54 mo. post-treatment (Pantuck, Leppert et al. 2006).

In addition, in vitro studies have suggested an anti-proliferative effect of pomegranate extracts on breast, lung, skin, colon and prostate cancer (Adhami, Khan et al. 2009). However, controlled human clinical trials are required before such conclusion could be generalized for all these types of cancers.

There is scientific evidence on a potential protective effect of pomegranate juice and extracts on cardiovascular health. Men and women, 65-75 y with a history of carotid artery stenosis (CAS), a state of increased carotid intima-media thickness (IMT), were randomized to either receive pomegranate juice for a year (treatment; n=10) or placebo (control; n=9). The objective of the study was to look at the progression of carotid lesions and changes in oxidative stress and blood pressure between the treatment and control groups. Consumption of pomegranate juice (50 ml) for 1 y decreased carotid IMT (30 %), serum LDL susceptibility to oxidation (59%) and systolic blood pressure (12 %) (Aviram, Rosenblat et al. 2004). The later has been suggested to be through inhibition of serum angiotensin converting enzyme (ACE) activity by the anti-oxidant compounds in pomegranate (Stowe 2011). Most studies in this area were performed on small sample sizes suggesting the necessity for further studies in this filed.

Even though the main nutritious properties of pomegranate are reflected when ingested orally followed by its digestion in the gastrointestinal (GI) tract, scientists have suggested a protective role of pomegranate compounds early in the GI system and that is mouth hygiene and dental health. Healthy men and women (9-25 y old) were randomized to distilled water (negative control; n=20), standard mouth rinse (positive control; n=20) and pomegranate extracts (hydroalcoholic) (treatment; n=20). Dental plaques were collected from all subjects before and 1 min after rinsing the mouth with 15 ml of either of the compounds they were randomized to receive. The dental plaque microorganisms, expressed as colony forming units per milliliter (CFU/mL), decreased significantly after rinse with pomegranate extracts and the standard mouth rinse compounds, 84 % and 79 %, respectively (Menezes, Cordeiro et al. 2006). While rinsing with distilled water only decreased the microorganisms by 11 %. This suggests that leaving a taste of pomegranate extracts may be beneficial for your dental health! To your health; and the best tasting hot sauce!